A to Z Blogging: N is for New Cover Reveal!

With special thanks to Elaina Lee of For the Muse Design for her artistic genius, here’s the cover for In Your Dreams, Book II of the Afterlife Series. 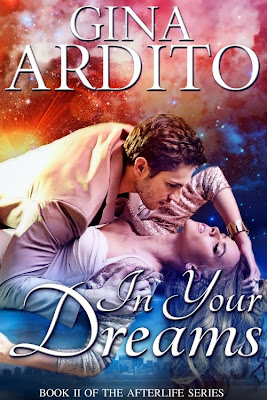 Pretty, yes?
And what good is a cover without an excerpt? So…here goes:

“You haven’t been yourself lately,” Verity continued. “You’ve become impatient, surly, and distracted. Therefore, the Board has decided to reassign you.”
Yippee.
“Your sarcasm is grating, Sean,” Verity muttered, one eyebrow arched in disapproval. “I would advise you to keep your animosity in control until you leave this auditorium.”
With that simple admonishment, she transformed him into a petulant child. He’d forgotten the sensory link that allowed her to hear his thoughts as easily as if he shouted them. A flush of heat wafted over his neck and cheeks, and he ducked his head to hide his reaction from her knowing gaze. “Yes, ma’am.”
“You should also work on your sincerity. Your penitent act is a little weak.”
So much for hiding. “Yes, ma’am.” He clasped his hands on the tabletop in the pose of obedient schoolboy. Inside, however, his stomach roiled.
“Be that as it may,” Verity said. “Your services in bounty hunting are no longer required. The Board would like to transfer you to the Probation Department.”
His head jerked up, and he studied her face for any hint of ridicule. He found none. The most serene expression met his scrutiny. “Probation? For what? For disagreeing with your destruction of two loving, innocent people?” He shot to his feet, screeching the chair legs across the linoleum floor tiles. “Go to hell.”
“Sean.” A warning tone, followed by a sigh and a light tap to the wrist, beckoned him back into the chair. A command he refused this time. “You are not on probation. Yet. But your continued animosity toward me and the Board will not solve anything. I am urging you to forget about Luc and Jodie, for your own welfare. Since you’ve seen the Chasm for yourself, I’m sure you don’t want to find yourself banished there.”
He bit his tongue to keep a perfect fuck you in check and shook his head. “No, ma’am.”
“Sit.” She jerked her head toward the chair where he’d eaten so many meals as a child in Brooklyn. “We’ve much to discuss.”
Frowning, he dropped into the chair again. Why the hell couldn’t he maintain some backbone around her?
“And don’t pout,” she chastised gently.
“I’m not.” He meant the words to be a firm denial, but they came out an adolescent whine.

Verity laughed. “My mistake, then.” She laid her hands palms-up on the table, and her happy expression sobered without becoming harsh. “This isn’t a punishment or a demotion. You obviously can no longer continue as a bounty hunter. The Board, however, believes you can become an excellent probation officer. You’ll report to that department immediately after we’re through here. Xavia is waiting for you. But first, close your eyes. I want you to watch something.”
He barely did as she directed before a vivid scene popped into his head. Unlike his last experience with this neurosensory mind-meld, the details of Sean’s former lives did not fill his senses. Instead, he saw a young woman staring into a medicine cabinet mirror. Her eyes, glistening from the strip of lights above the cabinet and a well of unshed tears, shot lasers into Sean’s heart. So much pain communicated from those sweet teddy bear eyes. Unbidden, Sean reached out a hand to touch her, only to draw back when he remembered he was viewing an image in his head. Whoever the woman was, she resided on Earth, far from his place here in the Afterlife.
Scrick-tick. Scrick-tick.
The strange rhythmic sound in her bathroom drew his attention. A bottle of prescription painkillers, cradled between her trembling hands, rolled back and forth, the plastic catching on the gold band on her third finger.
So much pain.
Where the hell was her husband? Even separated by dimensions of time and space, Sean sensed how alone she was. Alone, abandoned, and rapidly losing hope.
“Who is she?” The question erupted before he could stifle his curiosity.
Verity frowned. “Her name is Isabelle Fichetti. And as soon as she swallows those pills, she’ll become your responsibility.”

In Your Dreams will be released later this month. Woo-hoo!

For tips on writing and fun articles, visit Gina’s Articles For Writers page: https://ginaardito.com/ArticlesforWriters.html
Need editing services for your manuscript? Gina is proud to announce the launch of Excellence in Editing: http://excellenceediting.com/