Bad Behavior at the Supermarket

by Gina Ardito | Oct 11, 2015 | Advice Whether You Want it or Not, People Behaving Badly, Supermarket 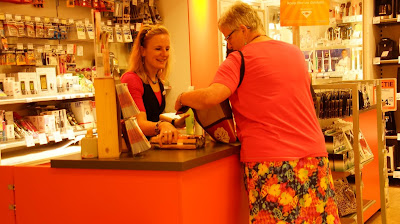 Last night, the Hubster and I spent the day running errands and at around 5 pm, decided to pick up a few things from our local grocery store for dinner. The lines at the cash registers weren’t crazy, just a bit busy, with about three customers waiting at each line and eight out of ten registers working. Hubster and I got in line behind another couple and waited, chatting without paying much attention. Until…

The couple in front of us started grumbling. It began with minor nonsense about the wait, but became more and more obnoxious. Apparently, the customer in front of them was having trouble with her payment and was forced to take some items off her bill.

These two graduated from grumbling to insulting and finally became loud. The woman shouted, “Aren’t you going to open any more registers? I have an emergency at home and can’t wait for people to get their act together.” To which the husband replied (not as loud so only heard by those around them), “Yeah. We have an emergency. We gotta go home to eat dinner.” And then they started laughing.

I could tell the woman at the front of the line was humiliated, and my heart went out to her. If I’d noticed the issue sooner, I might have offered to pay the difference (I found out from the cashier, it was only $13.00).

My first reaction to the rudeness of that couple was to wish them the misfortune of being in that very same situation while someone publicly drew attention to them. Then, I reconsidered. I don’t wish that scenario on anyone, no matter how much they need to learn to walk in someone else’s shoes.

Maybe what most people need is empathy.You don’t have to have lived an unfortunate incident to connect with the people involved. What you need is a dose of humanity. To that couple in the supermarket yesterday, I hope you find it. Fast.