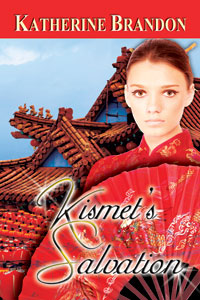 Today is the official release day for Kismet’s Salvation, Katherine Brandon’s Book III of the Kismet series. Want a sample? Sure…I’m in a generous mood today.

When Armand relieved Baptiste at the wheel one afternoon after a few days at sea, he found the lady steering South Star over the crashing waves. In order to see over the wheel to the watery horizons beyond the ship’s bow, she stood upon a makeshift platform built of folded canvas tied with rope. Baptiste hovered by her side and guided her with soft whispers.

“So, now we’re not only taking passengers, we’re instructing them on seamanship?” Armand asked archly.

Both culprits whirled in surprise.

“She’s a born sailor, Cap’n,” Baptiste told him, guilt evident on his wide-eyed, flushed face. “Got the salt in her blood, she does.”

But Armand paid little heed to the hasty explanation. His gaze remained focused on the lady who gripped the wheel. Not since he’d last witnessed his mother at the helm had he seen an expression of such pure delight on a woman’s face. The smile she displayed struck him dumb. She resembled a child on Christmas morning, awed by a bounty of gifts only dreamed of and never expected. Her eyes sparkled with the very same glint of silver he’d noted a few days earlier. Without the confines of her silly bonnet, a thick river of brandy-colored hair fell straight to her waist. Fiery lights from the setting sun formed a halo beyond her head. Pink tinged her nose and ears, the result of prolonged exposure to sun and wind. With no padding to enhance the width of her figure, the chubby little mouse was, to his immense surprise, willowy. She wore an old silk gown of his mother’s—he remembered it well.

Antoinetta St. Clair always favored rich, deep colors because they looked so dramatic against her golden skin and rich red hair. Yet, Miss Winchester’s pale ivory flesh set off the deep forest green of the gown with such vibrancy, she might cause peacocks to hide their tails in shame.

“Aye.” She placed her hands to her bosom as if she’d just discovered a wondrous secret and clutched it to her heart. “I’m beginning to understand why you insist upon spending your evenings here. It is unlike anything I’ve ever known.”

“The feeling of freedom, of course.” She flung her arms wide and inadvertently knocked Baptiste off the platform beside her. He stumbled and might have fallen if Armand hadn’t put a hand out to stop him, but she never noticed. “It surrounds me as I stand here. I can sense the ship responding to my intentions when I turn the wheel. Why, it’s almost as if she knows what I want before I do.”

Armand cast an amused glance at the displaced Baptiste, who shook his head. Miss Winchester might not be the most graceful sailor they’d ever had aboard, but she more than made up for that shortcoming with her enthusiasm.

“Aye.” He brushed the sleeves of his jacket with a disinterested air.

“Have you sailed many ships, Captain?”

He nodded. “My family owns a shipping business. I learned to sail before I could walk.”

“Oh, how I envy you,” she sighed. “It must be wonderful to lead such a footloose life!”

He quirked a brow. “Footloose?”

Roses bloomed in her cheeks. “Isn’t that what you would call it? Baptiste said a footloose sail is one whose bottom isn’t tied down properly. Without the proper restraints, he told me, it dances in the wind.” She dropped her gaze to her feet. “Forget I said anything. I’m being fanciful.”

Charming. This little slip of a girl enthralled him with her innocence. “No,” Armand assured her. “You’re not being fanciful. I suspect in some way your correlation is quite accurate. Compared to the stifled upbringing of a young lady in England, an American sailor’s life would seem footloose.”

“Come along, Miss Lydia.” Baptiste placed a hand on her sleeve. “It must be time for dinner if the captain has come to relieve us.”

“Oh, I couldn’t possibly eat,” she exclaimed. “I’m much too excited by all of this!”

He couldn’t stop the words that fled his lips. “Would you like to stay here with me then?”

She whirled. Her eyes brimmed with eagerness, and her hands clasped in supplication. “May I?”

He shrugged, attempting to seem unaffected by her zeal. But the truth of the matter was, he found her present mood contagious, and he had a sudden desire to see more of this side of her. If Lydia suddenly claimed her hunger overrode her need to steer the ship, he would have followed her to the galley and left Baptiste to man the helm. For the first time since he was a lad in New Orleans, something besides the quest for serenity beckoned to him. And that something burned inside a young lady whom he’d previously dismissed as a chubby little mouse.

You like? Well, there’s plenty more where that came from. Head on over to The Wild Rose Press and buy your copy now!

And if that weren’t enough, Gina got a nice little surprise in the mail today from Avalon Books. Seems Book I of her Nobody series, Nobody’s Darling, will be released in June 2011.

I foresee some great celebrating tonight!