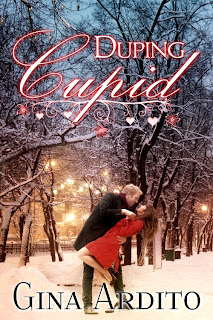 My Valentine’s Day short story, Duping Cupid, is on sale via all digital platforms for 99 cents. Ever get caught on a bad date? Here’s how Vivi (aka Cupid) handles the date from hell:

“Well, you look fabulous, Vivi,” Juliet enthused, touching her hand again.
But, apparently Julian wasn’t finished humiliating her. “Of course she does. She’s dropped a good fifteen pounds. Just another fifteen to go, eh, sweetheart?”
Caught in mid-sip, Vivi coughed.
“Take it easy, Vivi. I know the drinks are free tonight, but you don’t have to swig the stuff like we’re about to run out. We have plenty, I promise.”
Raucous laughter erupted from Julian’s circle of friends, and Vivi’s cheeks burned.
Did he plan to spend the night holding her up for ridicule to make himself look better? That was a vile plan. And not covered under her contract, either—an oversight she planned to rectify first thing Monday morning. Until then, she’d have to play along. But on her own terms. Since pole dancing was out by her own admission, she’d have to devise a different lesson for him.
“Sorry. I guess I’m not used to domestic swill.” Reaching between two men who watched her with eyes brimming with humor, she set her champagne glass on the bar. “In fact, I should probably switch to tequila.”
She arched a brow at the bartender, a handsome sandy-haired man with moss green eyes and a nametag that pegged him as Raul. “I don’t suppose you have Gran Patrón Platinum back there, do you, Raul?”
The bartender nodded, a secret smile playing about his lips. “We do, but it’s one hundred dollars per ounce.”
She waved off the ridiculous price. A full bottle of the stuff could be had from the liquor store down the block for about three hundred bucks total, but the more this place charged, the better her revenge. “That’s okay. I’m only doing a shot or two. Besides…” She jerked her head at Julian. “…he’s paying. Right, honey?”
He shifted on his feet, releasing her from his tight embrace. “Of course.”
Slapping a hand on the bar, she said, “Give me a shot,” then turned to the dozen or so people clustered around them. “Anyone else?”
Several men looked at each other, and finally, the one who’d originally waved them over, Stewart Campbell, picked up on the opportunity to screw Julian and stepped up to the bar. “Why not?”
“I’m in,” another man said with a grin.
“Sure. Let’s do it,” said a third.
The bartender wound up setting ten shot glasses on the bar and pouring a thousand dollars’ worth of golden tequila.
Once Raul placed the bottle back on its shelf, Vivi scooped up her shot and hoisted it in the air. “Ready, boys? Thanks, Julian!”
The men all grabbed their shots and echoed her toast.
“One, two, three.” After counting off, she tossed back the smooth buttery drink, swallowed, and smacked her lips at the aftertaste of citrus. “Aah.” She slammed the glass on the bar and ordered, “Hit me again, Raul. Anyone else?” She scanned the crowd, but they all stepped away, heads bowed.
“No, thanks,” Stewart muttered. “One was good.”
“One is good,” she replied, “but two are a necessity tonight.”
“Vivi,” Julian murmured with an underlying hint of warning. “That’s enough.”
“One more.” She nodded at Raul. While he poured her another, she leaned across the bar. “You know, you’re an exceptionally good-looking man.” Opening her clutch, she pulled out a business card. “Call me on Monday. I might have a side job for you.”
He took her card and read it, suspicion turning to surprise. “You’re Cupid?”

You can pick up your copy at Amazon, Kobo, Smashwords, and B&N.

Need editing services for your manuscript? Gina is proud to announce the launch of Excellence in Editing: http://excellenceinediting.blogspot.com/