Excerpt: The Bonds of Matri-money 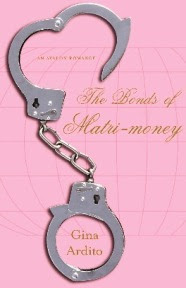 BLURB: Renata Moon and Connell MacAllister lost more than a frivolous lawsuit in a Manhattan courtroom. Paying the settlement will probably force them to close their non-profit business. That is, until
they learn about a new survivalist game show set in exotic Bali. Grand prize: one million dollars. The catch? The show is for newlyweds.
Nothing that a quickie marriage–in name only–can’t fix. But Renata and Connell didn’t anticipate they’d be linked by handcuffs the entire time they’re competing! Soon, spending days and nights with only a few inches of chain between them begins to stir feelings they never knew existed.
Before the competition ends, Renata and Connell will be forced to decide which means more to them: love or money.
Immediately upon reaching their destination, Bart Meadows announced the first challenge. “Each couple must pitch a tent for shelter. All tools required for the task are in the backpacks the men carry. You’ll have thirty minutes. Those who do not have a suitable structure erected in that time will be disqualified and sent to Home Base at the Summerhouse Hotel.” Holding a stopwatch in the air, he announced, “Ready? Set. Go.”

Renata turned to Connell, nervousness blending with perspiration to drip down her back. “Do you know how to pitch a tent?”
“Simple enough. I was a Boy Scout for years. First, we have to look around a bit. We need to find the right location.”
“How about over there?” She pointed to a nice, wide, flat piece of land beneath a low-hanging banyan tree. “Lots of shade and soft moss…”

“Nope. The ground is too flat.”
“I thought we wanted flat ground.” She tried to raise her hands to her hips, but the handcuff stopped her, and she settled for sarcasm to get her point across. “Or do you expect me to sleep on rocks for the next four weeks?”
“Forgive me, Princess. But ground that flat has been forced down from water. If it rains, we’ll be lying in the middle of a huge puddle. We need a place with a small crown.”
“Okay, sorry.” Whipping her head from side to side, she scanned the area as if she knew what to look for, and then finally gave up. “Um, Connell? What’s a crown?”

He shook his head and sighed. “You’ve never camped before, have you?”

“Up ‘til now, my idea of roughing it has been staying at a three star hotel instead of a four.”
His eyes moved from her apologetic shrug to the canopy of trees above them. “Fabulous. Just follow my lead, okay?”
“You got it.”
Within minutes, she regretted her acquiescence. He scanned the area like a dog sniffing out a convict, dragging her through two streams, over a hill and back before he found what he claimed was the perfect spot.
The tents provided by the television crew were standard camping issue, military green canvas attached to the ground with long stakes. It should have been easy for a carpenter with Connell’s golden reputation to erect a shelter in no time. After taking the stakes and a mallet out of his backpack, he pulled her down to her knees beside him and handed her an iron peg.

“Here.”
She turned it over, looking at it from several different angles before asking, “What am I supposed to do with this?”
With his free hand, he poked a hole in the soft ground. “Place the pointy end here and hold it tight. I’ll do the rest.”
“Don’t talk to me like I’m an idiot, okay?”
“Sorry.” His tone sounded remorseful, but the bemused grin he flashed said otherwise.
Biting her tongue, she stuck the pointy end of the stake into the hole and held it steady. Connell, with the mallet in his right hand as high as he could reach while on his knees, swung downward. Right smack dab on his left thumb.
“Dammit!”
“That’s what you get for acting so smug,” she told him, stifling a giggle.
“It isn’t funny, Renata. Look at this.” The nail hung from the side of his finger and bright red blood seeped through an open wound. Instantly, her nursing instincts took over.
“Take a break, Daniel Boone.” She plopped the stake on the ground. “We’ve gotta get that fixed right away.”
“I want to get the tent up first, Florence Nightingale,” he retorted. “If you don’t mind. It’s just a small cut, for God’s sake. It looks worse than it is.”
“Well, I do mind. And I’m not holding a single tent stake or doing anything else to help until you let me treat that thumb. In this part of the world you run the risk of infection, gangrene, or God-knows-what else if you’re not careful. How good a carpenter will you be with less than ten fingers?”
“Fine. Do that voodoo you do so well, but hurry up. I don’t want to lose the first challenge and wind up back at Home Base.”
Cupping her free hand to her mouth, she called, “I need the first aid kit over here!”
With a rustle of leaves, a skinny, dark-haired production assistant came bounding through the thick foliage carrying a little white case with a Red Cross emblazoned on its side. “Here you go.”
Renata took the case, her eyes never leaving Connell’s wound. “Thank you.” She opened the latch and pulled out a bottle of hydrogen peroxide, several cotton balls, and an adhesive bandage.
On second glance, the injury didn’t look as serious as she’d originally thought, but she’d never give him the satisfaction of admitting he was right. Instead she fussed as if it were life-threatening, taking care to only use a few drops of peroxide at a time and ignoring his hiss of breath as the liquid bubbled around the open cut. After blowing a bit of air through pursed lips, she dabbed the area with the cotton until the bleeding stopped, then placed the bandage around the injured digit. When she finished, she held it up, grinning with pride at her magnificent example of the healing arts. “There.”
“Done?” He held the thumb in front of his face, pushing his lips into a full pout and knitting his eyebrows to form a childish expression. “No kiss to make it all better?”
“No,” she said, yanking them to their feet and signaling the production assistant to remove the kit. “We have a tent to put up.”
“You think you can help now?”
“I’m going to have to.” She lifted her handcuffed wrist in the air, his naturally following suit. “Like it or not, you’re stuck with me for the next month.”
Connell picked up the mallet again, his cheeks heating. He liked being “stuck with” her. He liked it too much. He’d slammed his thumb because he’d been too distracted by her nearness, the smell of her, the sound of her voice, the thought that she stood no more than six inches from him and would probably remain there for the next thirty days.
Renata set the stake back in the ground as he raised the mallet above his shoulders.
“You ready?” he asked.
When he received her nod, he brought it down directly on the head of the stake. Sheer luck this time. Regardless of how hard he tried, his eyes strayed over her perfection, as if committing her to memory. Before lifting the mallet again, he took a moment to wipe the sweat from his brow with his bare arm. How could he ever hope to survive the next four weeks handcuffed to her?
Good God, this coming month would kill him. Why couldn’t he be drawn to a woman who was drawn to him?