Warning! Long post. But it could be worth the read for a lot of you.

Seventeen years ago, I was diagnosed with Graves Disease, a hyperthyroid disorder that, in my case, had become so acute, I was urged to undergo radioactive iodine therapy. After the therapy came years (no, decades) of specialists and pills and bizarre new ailments. From the start, I was deceived by the medical community.

But that’s not all…

No one told me that after the procedure, I would have to quarantine myself from everyone in my household. I had a newborn at home and had to scramble to find someone to take him from us for a week. My laundry had to be done separately from the rest of the family’s. I couldn’t use the same silverware, dishes, and glassware, and all my things had to be washed separately. I had to watch my iodine intake. I’d suffer from excessive dry mouth. No one mentioned the need for dental care prior to the procedure or warned me that the teeth in my mouth might crack in half, due to radiation in my saliva.

I won’t go into the details of the treatment itself. (Just picture someone in a lead suit handing you a pill in a lead container with six-foot long lead tongs and saying, “Here. Swallow this. But wait ’til I’m out of the room.”) From the moment I was put on Synthroid, I complained to my various specialists that I honestly believed the thyroid medication was not working for me. And over the last seventeen years, my symptoms and complaints have been ignored or dismissed.

Since the RAI treatment, I’ve had seven different endocrinologists. I’ve never remained on the same level of thyroid hormone for more than six months. I gained fifty pounds–weight I still struggle to lose and can’t, no matter what diet I try or how often I go to the gym. I went through peri-menopause for thirteen years and dealt with excessive hot flashes, night sweats, and mood swings. I’ve battled with depression. I’ve suffered fibromyalgia and arthritis and constant pain that sometimes had me curled up on the bathroom floor, too debilitated to move. I have herniated discs and bursitis. My hair falls out at alarming rates. And yet…my TSH levels are considered within “normal range.”

Two years ago, I finally said, “Enough. There has to be someone out there who can help me.” I found a naturopath and, after reviewing my history, she agreed with me that the thyroid meds had not only not worked for me, they’d pretty much shut down my metabolism. My adrenal glands were overworked and underperforming. Big time. Don’t believe me? Take a look at this chart: 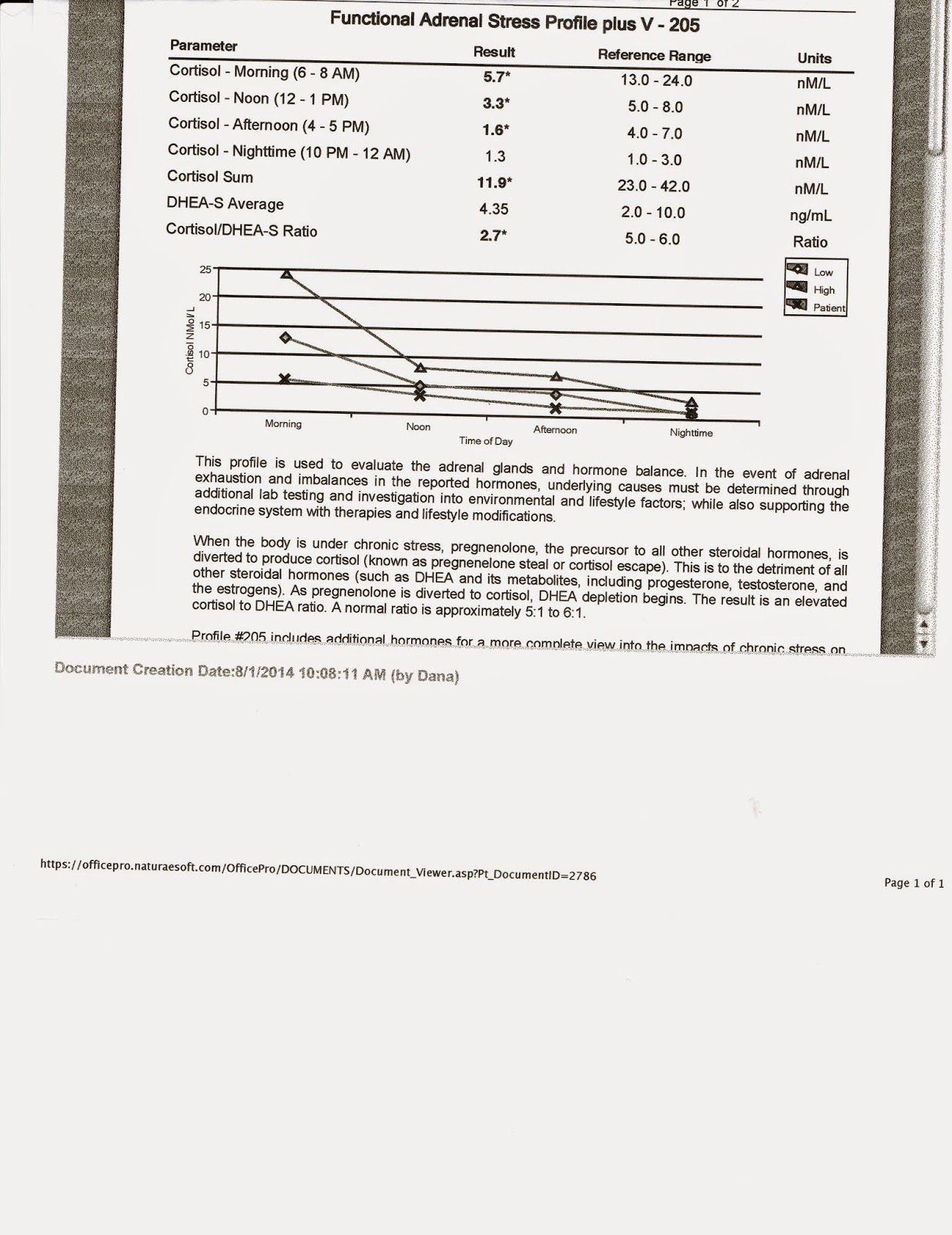 These are my actual results. Start with the numbers. Column 1 are my numbers, column two are the normal ranges for each item. For example, in the morning, the normal range for cortisol levels is 13.0-24.0. What were mine? 5.7. During a typical day, the normal person has a cortisol sum of between 23.0 and 42.0. Mine was 11.9.
Let me repeat that: 11.9! Below normal by nearly half!
Numbers not your thing? Need a visual? Read the graph. The top line on the chart (with the triangle) is considered “high,” the middle line with the diamond and circles is considered “low.” Normal range would be a line somewhere between those two. The bottom line, with the Xs? Those are my results. What does this say? In essence, it says I’m already far below normal levels of adrenal function when I get up in the morning, and I’m slowly fading from that point on throughout the day, every day.
In other words, I was a walking zombie. And not the fun kind of fictional zombie. Clearly, I was right. And all those specialists were wrong. There was something seriously wacky going on with my thyroid meds.
I started doing some online research, read several books on the subject (I highly recommend STOP THE THYROID MADNESS!) I found out I was not the only one who’d fought with her endocrinologists, and my prolonged symptoms were actually quite common in others who’d undergone RAI and then been placed on Synthroid.
Time to take charge.
Together with my naturopath, my personal trainer at my gym, and a brand spankin’ new endocrinologist who had an open mind, we developed a new health regimen for me. Bye-bye Synthroid. Hello, Thyroid Armour. Bye-bye dairy, sugar, and most (but not all) gluten. Hello, protein. Lots and lots of protein.
It’s only been about six weeks, but I’ve already noticed the changes. The fibromyalgia is gone. Gone! I’m finding less hair on the floor after a shower. The nice me is back, and I smile a lot more. I sleep better, and I wake up refreshed. The weight’s still an issue, but I have hope. I’m a work in progress. I’ll know a little more next month when I go back for my follow-up with my endocrinologist.
Whether or not you’re a thyroid patient, whether or not your symptoms and story are similar to mine, take note of the moral of the story. Doctors don’t know everything. Doctors don’t know your body the way you do. If your doctor won’t listen to you and help you find answers, find another doctor! And keep looking until you find the right one for you.