New Cover. I Haz One

The revamping for the current Calendar Girls series is completed with the release of the newest updated cover for the novella, CHARMING FOR MOTHER’S DAY.

I couldn’t be more thrilled with Elaina Lee‘s vision for my girls. And believe me, I’m a challenging customer!

For those who aren’t familiar with CHARMING, let me introduce you to the first taste of the little Long Island town of Snug Harbor.

Ariana stared up at Colin, her honey eyes filled with girlish adoration, as if she’d found her personal Prince Charming. “I rooted for you on the show, Chef Colin.”
She and I had watched “All Star Chef” every Tuesday night, with Ariana critiquing the different contestants’ skills and reporting her conclusions to Sidney every Wednesday.
“You did? Thank you. I appreciate the votes of confidence.”
Oh, puhleez. I had to turn away so he wouldn’t see me roll my eyes, and only faced the crowd again when I had my placid expression under control.
He lifted his gaze from Ariana to me. “That must be why I won. I had two very pretty ladies secretly cheering me on.”
I winced, knowing what would come next. Sure enough, Ariana speared me with an icicle look. “Mom didn’t root for you. She wanted Chef Christian to win.”
His hazel eyes, familiar in my dreams, crinkled with amusement as Colin joined my daughter in the staring contest. Target: me. “Did she?”
My cheeks flamed, but I pulled off a dandy imitation of a casual shrug. “Guilty.”
“Mind if I ask why?” he persisted.
Damn him, he should know why. But of course, he didn’t. Why would he? I was just a summer fling—a fact he drove home when he dumped me after a few weeks, going so far as to give me an invalid email and the wrong phone number.
“She said you were too snotty to win.” Once again, my daughter pushed me under the proverbial bus.
To my surprise, though, he laughed. “She’s probably right. It’s certainly nothing I haven’t heard before.”
I didn’t react. On the outside. On the inside, my heartbeat hammered my ribs, and my throat dried to sawdust.
After several squirm-worthy seconds, he refocused his attention on Ariana. “So, if your mom thought I was such terrible person, why did you want me to win?”
“I thought you had great knife skills,” she replied with more conviction than a prosecuting attorney. “Even better than Grandpa.”
“Watch it, snickerdoodle,” Sidney growled then grabbed her by the waist.
She screeched, and he pulled her against his side for a series of noisy kisses to her cheek.
Through a riptide of giggles, she amended, “Well, he’s pretty good, based on what I saw on the show. Maybe you guys can have a contest before you move to Florida.”
My rigid stance relaxed. Oh, thank God. In the back of my mind, I’d wondered why Colin had suddenly appeared at the Gull and Oar. But he must have just stopped by as a courtesy to Sidney before heading south. In that case, I could be gracious to him. Temporarily.
“Florida, huh?” I said to Colin. “Are you opening a new place down there? Whereabouts?” Not that I ever planned to visit, but—

Who wants to see the new home for the pages of these fabulous characters?
Here ya go. 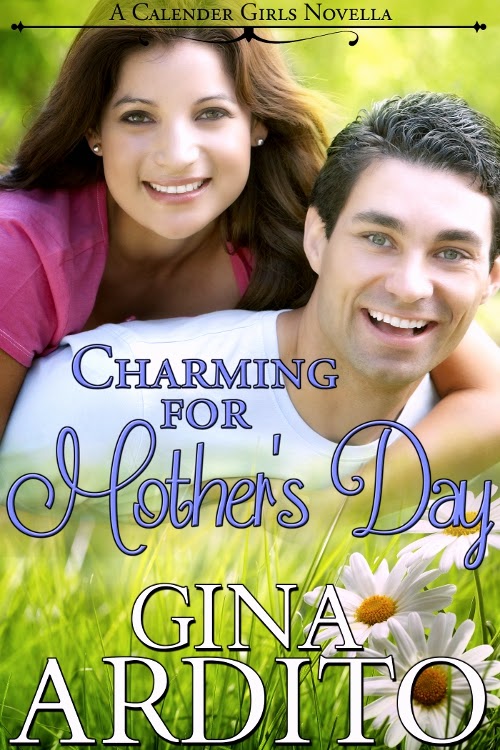 Isn’t it gorgeous? Don’t you just love the colors?

So what are you waiting for? Do you have your copy? No? Go get it!

Don’t worry about cost. CHARMING FOR MOTHER’S DAY is free! All day, every day in all digital formats.

Find it on Amazon, Smashwords, Barnes & Noble, and NoiseTrade.

For tips on writing and fun articles, visit Gina’s Articles For Writers page: https://ginaardito.com/ArticlesforWriters.html
Need editing services for your manuscript? Gina is proud to announce the launch of Excellence in Editing: http://excellenceediting.com/