I’m thrilled to announce the launch of my newest series, The Calendar Girls, with Book I: Duet in September.

The Calendar Girls are all residents of Snug Harbor, a fictional resort town on the east end of Long Island. Each book will feature two characters and the problems they face in any given month. In Duet in September, Nia and Paige Wainwright are twins who’ve just buried their only parent, their father. Now, they’ve decided to try a unique experiment where each day, they’ll do something to shake up their normal routine. This experiment is supposed to open them up to new opportunities, and of course, it will! But perhaps, not with the results the ladies expect. Wanna peek? Sure, you do! 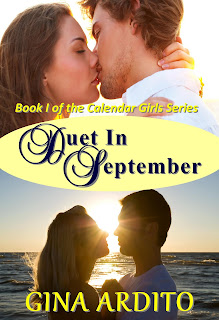 Sam’s grin sparked fireworks in my belly.
In the dim hallway last night, I’d found his smile dazzling, but in the light of day, I could easily understand Nia’s attraction to the rest of him. He looked like a sun-bronzed god, all sinew and golden skin with eyes the color of honey and the lushest lashes I’d ever seen on a man.
If only he were mute…
As if to introduce itself, the fawn-colored dog suddenly lurched forward to sniff at my sneakers.
“Daisy, get down.” Sam yanked on the leash.
“Hi there, sweetheart. Aren’t you a love?” I bent to rub the pooch between its folded ears, then looked up at Sam again. “I didn’t know you had a dog.”
“Daisy won’t hurt you. She’s big but loveable.”
“Daisy?” I quirked my eyebrows. “You named this huge beast Daisy?”
“Not my choice. She’s a rescue from the Greyhound Liberation. Her full name is Daisy Chain of Love.”
“Wow.” I slipped my hand under Daisy’s angular jaw, and she snuffled. “I’m impressed.”
“Don’t be,” he replied. “All the racers get goofy names.”
Actually, I was referring to the fact that he had a softness for any living thing. But I wisely bit back the insult. “How long have you had her?” I asked instead.
“Two years.” Daisy licked his hand, and he patted her fondly. “If you’re thinking about a pet, I could probably hook you up with the rescue group. They’re always looking to place retired greyhounds.”
Me with a dog? I shook my head. I couldn’t even keep a houseplant thriving. “I don’t think I’d have the energy for a former racing star.”
“The keyword there is ‘former.’ They’re retired so they actually don’t do much running. And you’ve got a decent-sized yard for a dog to get out his ya-yas. Besides, you look like you could handle anything.” He glanced at my bike, then the road ahead, as if he didn’t want me to see the smirk on his face from his attempt to compliment me.
Yeah, sure. Suddenly he’s worried about hurting my feelings. Get a grip, Paige.
“Where you headed?” he asked, gaze still fixed on the horizon.
“The wharf, then home again.”
He whistled through his teeth. “Oh, right. But you don’t have the energy to keep up with a greyhound. That’s like…what? Eight miles round trip?”
Eight miles?! I swallowed a gasp and forced a casual smile. No way did I want him to know I had no idea how long a trek I’d planned for myself. “Yeah, something like that.”
“You training for some kind of marathon?”
“Sort of,” I lied. “The 10K Twin Fork Ride is next month. I figured I might as well start getting ready.” Wow. Could I get any more ridiculous? No way I had the slightest intention of participating in that torturefest.
“Where’s your water?” He gestured to my bike frame, then looked up at the sun and shielded his eyes with the flat of his hand.
Water? My gaze followed his to the empty wire rack where a water bottle should rest beneath my seat. Oops. I forgot about bringing something to drink on my morning trek. I wasn’t about to let him get the better of me, though.  “I’ll pick up a bottle when I get to the wharf,” I replied with a dismissive air.
His brows rose in twin arcs. “The wharf is still two miles from here. You’ll dehydrate long before you get there.” He jerked his head in the direction of the side street. “Come back to the house with Daisy and me, and I’ll grab you a coupla cold ones to go.”
If this were a movie, the creepy music would start building right now. What should the naïve heroine do? Go home with the monster so as not to hurt his feelings?
Lucky for me, this wasn’t a movie. I had no qualms about turning him down. “No, that’s okay. I’ll be fine.”
“Do I scare you, Paige?”

Duet in September is available now at Amazon, Smashwords, Kobo, and iTunes. I hope you’ll pick up a copy and by all means, let me know what you think!

For tips on writing and fun articles, visit Gina’s Articles For Writers page: https://ginaardito.com/ArticlesforWriters.html
Need editing services for your manuscript? Gina is proud to announce the launch of Excellence in Editing: http://excellenceinediting.blogspot.com/