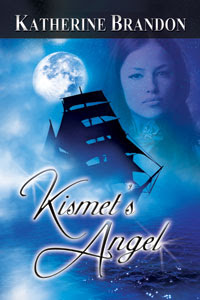 Nearly a month early, but, Kismet’s Angel, Katherine Brandon’s first book in her historical Kismet series is available under the Sneak Peek section at The Wild Rose Press!

Let’s start with the blurb:

Raised by a ragtag group of tender-hearted sailors in 19th century Hyderabad, Antoinetta Manu has grown into a woman determined to sail her own course in life. But when her past and future collide with terrifying results, only one man can set her free.


American merchant, Darian St. Clair has come to India to find out the truth about the death of his stepfather’s only child. What he finds is a woman he cannot live without.


Spanning two continents and two realms, Kismet’s Angel is the story of two extraordinary mortals, one determined goddess, and a destiny that only true love can fulfill…

You can read an excerpt on The Wild Rose Press site or my website, but what the heck? I’m feeling generous today. I’ll post another one for you here:

Who was this man? Friend or foe? Would a foe bring her aboard one of her own ships? If he’d planned to accost her, he’d miscalculated. Badly.

Surrounded by friends, she was safer here than anywhere else on these piers. One last jostle where her cheek actually felt his thigh muscles straining. And then, her position suddenly changed.


She stood upright, feet on the floorboards. Pushing sheets of hair from her face, she focused first on the main deck of Star of the Mountains, and then on the dripping man before her. Eyes greener than spring grass met her gaze. He smiled, offering comfort she supposed, and for a moment the tingle in her blood twitched her lips.


Until she scanned the rest of the deck to see dozens of pairs of amused eyes watching the exchange with avid curiosity. Ahmed, however, was not among them. The heat inside her chilled. His absence indicated more a curse than a blessing. Somehow, she doubted this man’s dive into the bay had escaped her vigilant uncle’s notice. Which would mean her adventure was no longer a secret. Damn it all.


Apparently unaware of her growing displeasure, the wet man bowed. “There now. Safe at last.”


Doubtful. Not with the threat of her uncle looming. Still, she managed to mumble a quick thank you before nodding at the slight, balding captain who stood in front of the grinning crowd. “Uthman. Welcome home.”


Without another glance at her so-called rescuer, she climbed atop the rail and dove into the sea.