Release Day for A Run for the Money! 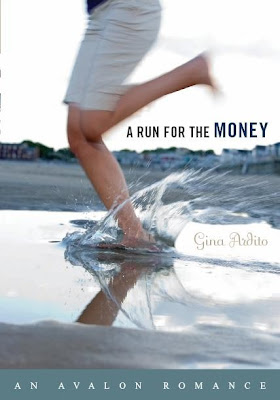 Today, my latest release from Avalon Books, A Run for the Money, is available at B&N, Amazon, and Avalon.

Nicole Fleming and Dante LaPalma have nothing in common except an old man’s legacy. Joe Corbet has promised them a great treasure awaits them–if they’re clever enough to solve his riddles within a six month time frame. According to Joe’s will, Nicole and Dante must participate in several excursions. After each adventure, a new clue will be presented and another requirement awaits. Only when they’ve completed every task in their journey will they discover the treasure meant just for them. Along the way, Nicole and Dante will be forced to share their secrets and place their faith in one another. But if they can learn to work together, they’ll discover what’s truly important in life. And maybe, just maybe, they’ll find the greatest treasure of all: love.

Still not sure? How about an excerpt?

When Nicole Fleming squirmed, the sound of sweaty thighs unsticking from her leather chair resonated like a blaring trumpet. Inside the conference room for the law offices of Stern, Stern and Weitzman, two pairs of male eyes mirrored disgust. Oh, God, how embarrassing. Why hadn’t she worn pantyhose today?

Because encasing legs in nylon during Manhattan’s dog days of July better suited a game show challenge than a will reading. Between the hellish temperatures in subway tunnels and the swelter rising up from city asphalt street-side, an extra layer of clothing would have wilted her long before she reached the mausoleum lobby here.

Fresh heat rocketed up her cheeks. Muttering a low, “Sorry,” to the staring gentlemen, she averted her gaze to the wall of leather-bound books on her right. Their red and green spines, embossed with gold lettering, were at least two inches thick. Had the attorney really read all those books? Who had that much free time?

Not her. She barely finished one month’s Cosmo before the next issue landed in her mailbox.

At the head of the long mahogany table, Andrew Stern, Esquire, cleared his throat and shuffled a sheaf of papers atop a manila folder. “If I may continue…?”

Nodding, Nicole straightened. The man seated across from her stared with the intensity of a buzzard on a dying gazelle. Who was this guy? And why were there just the two of them in this room with the attorney? Papa Joe had dozens of friends, and, if memory served, a daughter with a family of her own. So how come she was stuck with Mr. Monogrammed Shirtsleeves and the unblinking vulture of doom? Where were the truly grieving? Those who’d loved Papa Joe the way she had?

“There are, of course,” Mr. Stern said, lifting a longer sheet from the pile of standard-sized papers, “a few charitable donations and family obligations. But the bulk of Mr. Corbet’s estate will fall to the two of you, depending upon your adherence with his final wishes.”

Nicole sniffed. Some estate. As far as she knew, Papa Joe’s only worldly possession was a mangled mass of chrome, once a primo 1980 Harley Davidson Roadster. At least, until a tractor trailer made an illegal U-turn, destroying both ride and rider.

Tears pricked her eyelids. Never again would she hear his folksy voice, spouting the wisdom of the ages. His chipped-front-tooth smile would never flash in welcome. She’d never again smell his unique scent of motor oil and Old Spice in her kitchen.

“Exactly how much money are we talking about?” the vulture asked.

His callousness transformed Nicole’s grief to smoldering anger. “Wow.” She forced a light air far from the turmoil churning her gut. “Did you leave your membership card at the door?”

Dark eyes flashed like the silver wrapper on a semi-sweet chocolate bar. “What membership card?”

“The one that verifies you’re human.” When he continued to stare blankly, she added, “You know. A guy with a working heart.”

With the speed of a snapped cable, his jaw dropped. Good. In the few minutes she’d spent with him here, she’d picked up his vibe. Few people dared challenge him.

Correction. Few women dared challenge him. No wonder, really. Whoever he was, this man had the sultry look of palm trees in sunset, drinks with teeny umbrellas, and warm Caribbean water kissing bare flesh. Under normal circumstances, she might have found the whole Fantasy Island package a turn-on. But Papa Joe’s sudden death had encased her in dry ice.

Eyes narrowing to cobra slits, the man whirled to the attorney at the head of the table. “Who is this woman?”

As if swerving to avoid an oncoming truck, Mr. LaPalma suddenly rolled back his chair. “She’s the succubus’s daughter?”

Fine hairs danced on Nicole’s nape. “Could you control the urge to talk about me like I’m the senile auntie in the corner? If you want to know about me, Mr. LaPalma, why not ask me?”

A smile, filled with the same snake-like malice as his eyes, bloomed over his face. “Yup. You’re the succubus’s daughter, all right.”

Any response she made now would only cause delight. So she ignored him. Not because of some perceived insult at his calling her mother a succubus. After all, Papa Joe had assigned that particular term of endearment to his ex-wife years ago.

No. Having this stranger draw a link between her and Ice Princess Rhoda stung. Okay, so maybe she should have expected a rude retort after her crack about him not being human. But his barb had struck extra-tender flesh. Hands folded in her lap, she settled her gaze on Mr. Stern’s disapproving frown.

“I’d advise you two to put aside whatever petty differences you harbor,” the attorney said. “Your tasks will be inordinately easier if you get along.”

“T-tasks? What tasks?” An anxiety train barreled through her veins, sparking jitters in her blood.