Striving for the Goal!

Today was the annual county-wide scrimmage for my son’s football team. For four hours, I sized up players on other teams (who always looked a whole lot bigger and meaner!) and kept my fears to myself when they lined up against my little guy.
Time and again my boy was knocked down–sometimes after substantial yard gains, sometimes with no forward motion at all. Time and again, he picked himself up, and tried again. At one point, he and his teammates played a team who decided to try intimidation. They tackled one of our boys and then sat on his chest, pushing the ball into the kid’s ribcage. Then when they tackled my boy, they punched him in the back–both actions meant to knock the wind out of our players and make them a little more tentative on the field. Their ploy backfired.
For the rest of their time against this team, my son and his teammate made these players regret trying such underhanded tactics. After every snap, The Boy, small and fast, would race to whoever got the ball and practically run rings around him to keep him from a forward advance. Meanwhile, his teammate (the kid they sat on) would fly in out of nowhere and drive the opponent to the ground.

Writers can learn a lot from peewee football. Think about it… 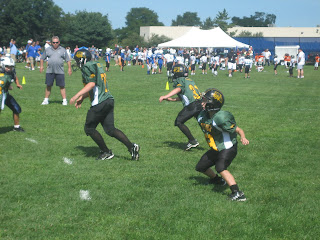 And for a little extra Saturday cuteness, meet Cocoa Puff, the baby wild bunny (smaller than a baseball) we found sleeping on our patio when we got home. Say it with me now: “Aaaawwwww!” 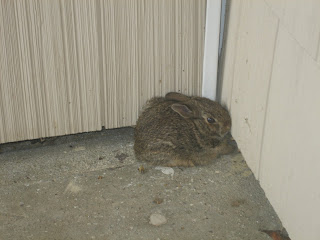 No worries, though. Cocoa Puff returned to his nest some time later in the afternoon.